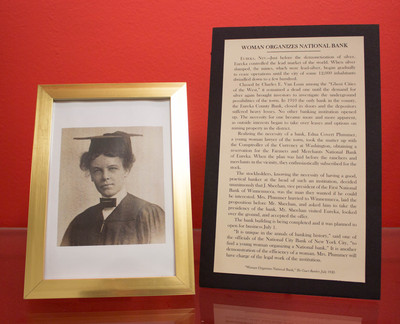 On June 8, 1907, the Racine News reported that “Miss Covert became the leader of her class...a most brilliant and successful future is certain for the young lady.” Before her graduation from the Chicago-Kent College of Law, Covert was employed as a secretary to Frederick Rawson of the Union Trust Company of Chicago, where she developed her business skills, and wrote a check for $3500 to William Wrigley for the development of his chewing gum business. After passing the Illinois bar in October of 1907 and practicing law for 5 years in Chicago, Covert traveled to Nevada as an attorney for a mining company, where she married. Upon passing the Nevada bar in 1912, Covert was admitted to practice law before the Supreme Court in 1913. She was frequently appointed by the governor of Nevada to otherwise all-male boards, and in 1918 was unanimously appointed by county commissioners to serve as the first female district attorney in the state of Nevada, and in the nation. In 1920, Plummer began organizing what would become the Farmers and Merchants National Bank of Eureka. An official with the National City Bank of New York said of Edna, “It is unique in the annals of banking history to find a young woman organizing a National Bank. It is another demonstration of the efficiency of women.” Covert moved to California in 1922, where she practiced law until her retirement in 1970, at the age of 93.