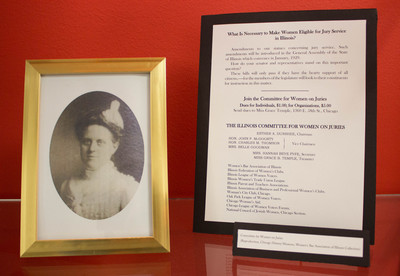 Esther A. Dunshee was born in September of 1879 in the town of Wilmette, Illinois. In 1941, she reminisced that school had always been the best part of her life, which is why she continued in her education after high school, and earned a law degree from the Chicago-Kent College of Law in 1902. During her career, Dunshee practiced law in the Loop, was co-founder of the League of Women Voters, acted as chairman of the Committee on the Legal Status of Women, and in 1924 published a survey of the legal status of women in 48 states. Together with Chicago attorneys Kate Kane Rossi and Catherine Waugh McCulloch, Dunshee was an early leader in the suffrage movement, and headed the effort to introduce to the state legislature a bill that pushed for the woman’s right to serve on a jury. Introduced in 1920, the Women’s Jury Bill was finally signed into law in 1939. Also in 1924, Dunshee served as chairman of a committee seeking a constitutional amendment that would give married women full economic control half of all marital income and savings. After Dunshee’s death in 1962, former colleagues from the League of Women Voters remarked on her tenacity: once when Bower was ill, she took an ambulance from Evanston Hospital and was carried to the voting booth on a stretcher.