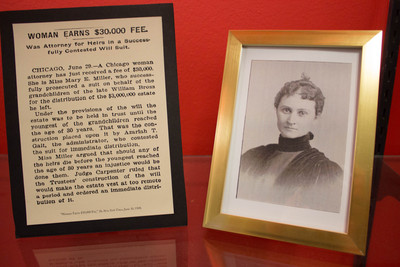 Born in Calhoun County, Michigan in 1865, Mary Eva Miller came to Chicago to become a stenographer in a law office. She attended evening classes at the Chicago College of Law and graduated in 1895, passing the bar in June and opening her own office in the Monadnock Building that same year. She began working on criminal and civil cases in the city, practiced in Chancery Court, and later specialized in real estate and wills. She gained attention for her first jury trial, when the judge appointed her as attorney for a defendant whose attorney had not shown up. Miller found an error in the indictment, and got the prisoner a new trial, lowered a 5-year sentence to a petit larceny with a sentence of a few months. In June of 1906, Miller was refused a room at a Niagara Falls hotel because hotel policy stated that no single women would be admitted after 6PM. She organized a boycott of hotels with similar policies with the National Business Women’s League, stating “This is a grievous wrong to every woman who is compelled by circumstances if not from choice to travel alone...the hotel proprietors are obliged to furnish accommodations to the traveling public. If they don’t they can be prosecuted.” Miller made headlines again in 1908, when she won a $30,000 fee for her prosecution of a suit on behalf of the grandchildren of the late William Bross with regard to his estate. It was hailed as the largest fee paid to a woman lawyer to date.