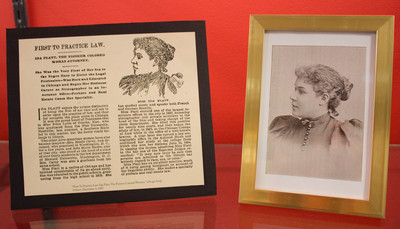 Born in Chicago in 1863, Ida Platt became the first African-American woman to earn an Illinois law license, and the first African-American woman to graduate from Chicago College of Law in 1894. Platt worked her way through law school, employed as a law reporter and stenographer in the law office of Jesse Cox, a white Chicago attorney who specialized in patent law. Upon her admission to the bar in June of 1894, Platt began working in the office of Joseph Washington Errant, a white Chicago attorney and former high school classmate. In Errant’s downtown office, she specialized in probate and real estate law, and developed a large clientele of foreigners due to her fluency in German and French. Platt later opened her own law office on Van Buren Street, where she practiced from 1906-1910. During this time, she moved her family from the area known as Chicago’s Black Belt to the prestigious, and mostly white, Hyde Park neighborhood. She continued to practice law, both from her own office in the North American Building on State Street, which she opened in 1911, and from her home in Hyde Park, until 1928. At the age of 65, Platt married and relocated to England, where she passed away in 1939. Ida Platt remained the only African American woman lawyer in the state of Illinois until 1920.