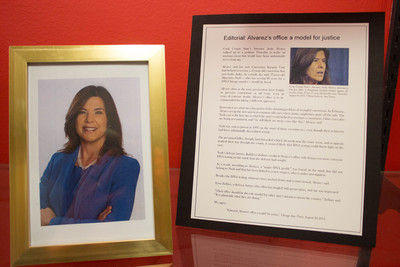 A Chicago native, Anita Alvarez grew up in the Pilsen neighborhood and received her undergraduate degree from Loyola University of Chicago. After graduating from Chicago-Kent College of Law in 1986, Alvarez began her career as an Assistant State’s Attorney. She served as Chief Deputy State’s Attorney, Chief of Staff to the Cook County State’s Attorney, Chief of the Special Prosecutions Bureau, Deputy Chief of the Narcotics Bureau, and Supervisor of the Public Integrity Unit. She spent 3 ½ years in Chicago’s Gang Crimes Unit, argued before the Illinois Appellate Court, and tried more than 50 felony jury trials. In 1996, Alvarez was promoted to to the Supervisor of the Public Integrity Unit, and served until 1999 when she was promoted to Deputy Chief of the Narcotics Bureau. In 2008, Alvarez was elected Cook County State’s Attorney, the first female, first Hispanic, and first career prosecutor ever elected to the position. She served as President of the Chicago Bar Association in 2009 and was a founding member of the National Hispanic Prosecutors Association and served as its President.