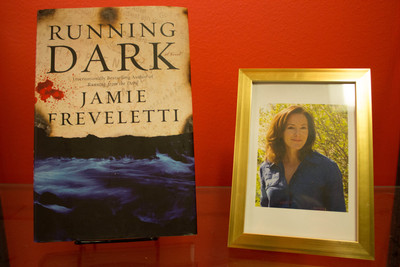 Jamie Freveletti is a trial attorney, martial artist, runner, and author of several bestselling thrillers. After graduating from IIT Chicago-Kent College of Law in 1985, Freveletti lived in Geneva, Switzerland, where she obtained a diploma in International Studies. In Chicago, she represented clients in areas ranging from class action settlements to securities fraud. In 2009, her debut novel, Running from the Devil, was chosen as a “Notable Book” by the Independent Booksellers of America, awarded "Best First Novel" by the International Thriller Writers, awarded a Barry Award for "Best First Novel" by Deadly Pleasures Magazine, and nominated for a Macavity Award for" Best First Mystery" by the Mystery Readers International and "Favorite First Novel of 2009" by Crimespree Magazine. It has been translated into three languages and was an international bestseller. Her second novel, Running Dark, was released in June 2010 and made both the Chicagoland and South Florida bestseller lists. The third novel in her series, The Ninth Day, was released in September of 2011 and was chosen as one of the “Best Thrillers of 2011” by Suspense Magazine. The fourth in her series, Dead Asleep, was released in October 2012 and hit #1 on Amazon’s Kindle bestseller list. She was tapped in 2011 by the estate of Robert Ludlum to write the next in the Covert One series. Robert Ludlum’s The Janus Reprisal was released in 2012.