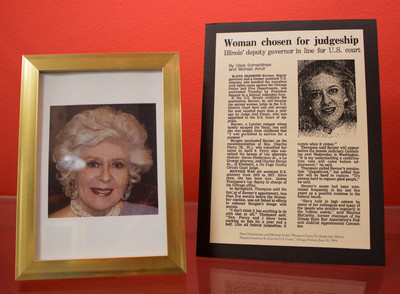 Born in Riga, Latvia, Ilana Diamond Rovner came to the United States in 1939 to escape the Nazi invasion. Rovner graduated from Bryn Mawr College in 1960, studied law at King’s College, University of London, and later at Georgetown University, finally earning her degree from Chicago-Kent College of Law in 1966. Rovner served as a law clerk to former Chief Judge James Parsons of the U.S. District Court from 1972-1973, then as an assistant U.S. attorney and federal prosecutor from 1973-1977. During this time, Rovner was involved in complex civil rights cases, and had a role in over 100 civil rights investigations in the areas of employment, housing, education, public accommodations and prisoners’ rights. In 1977, Rovner became Deputy Governor and legal counsel for Governor James R. Thompson of Illinois until 1984, when she was appointed as a judge to the United States District Court for the Northern District of Illinois by President Ronald Reagan. She served until her appointment in 1992 by President George H.W. Bush to the United States Court of Appeals for the Seventh Circuit. She was the first woman to be appointed to the Seventh Circuit, where she remains today.