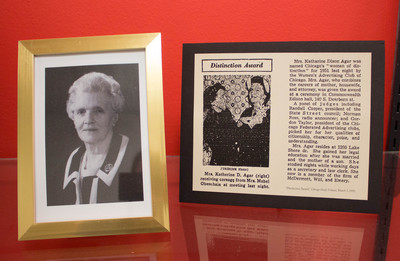 Katharine Dixon Agar graduated from Chicago-Kent College of Law in 1941. She became an associate in the firm of Will, McDermitt and Emery. She became the first female income partner of the firm in 1961, and the first female capital partner in 1964. She specialized in probate and tax work. Agar served as president of the Women’s Bar Association from 1947-1948, and in 1954, she was voted the first Distinguished Woman of the Year by the Woman’s Advertising Club of Chicago. She was inducted as a member of the Chicago-Kent Honor Council in 1971, and in 1980 received the law school’s Distinguished Service Award, recognizing her as an individual who made a significant contribution to the law school. Illustrating her dedication to the law, in an interview for the Chicago Daily News in 1951, Agar remarked “"I deal in people law, not book law. I was trained in the tradition that an attorney is like a doctor - when you have a problem, you should be able to see him right away." Agar retired in 1980 and passed away in November of 1991.