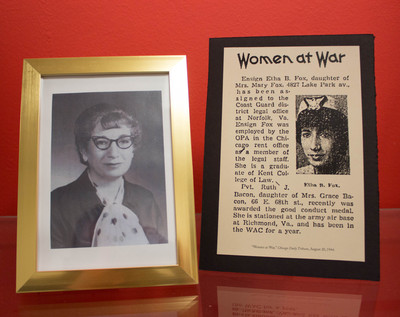 Etha Beatrice Fox was born in 1914. She was one of the few women to graduate from Chicago-Kent College of Law in 1939. She was admitted to practice in the Illinois Supreme Court, the U.S. District Court for the Northern District of Illinois, the U.S. Court of Appeals for the Seventh Circuit, the U.S. Supreme Court and the U.S. Court of Military Appeals. In 1944, Fox joined the U.S. Coast Guard Reserve, and served during World War II, retiring in 1974 with the rank of captain. She spent nine years working in the Office of Rent Stabilization in Chicago and seventeen years as law clerk to the Honorable Win G. Knoch of the U.S. Court of Appeals for the Seventh Circuit. She specialized in international and military law and was a tireless advocate for women in the legal profession. Fox served as president of the Women’s Bar Foundation, volunteered for the Red Cross for more than 20 years, and volunteered as a reader for Recording for the Blind for 56 years. In 1962, she was recognized by the National Council of Jewish Women and the YWCA for her contributions in peace and international understanding. She passed away in 2012 at the age of 98 and was buried in her Coast Guard uniform.