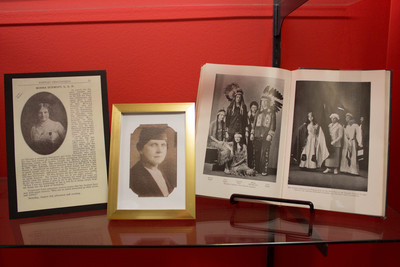 Wilhelmine Friederike Moscherosch Schmidt was born in Sindelfingen, Germany in 1866. The first of 17 children, Schmidt became a seamstress, saving the money she earned for passage to America. She entered the United States in December of 1886 and found work as a seamstress, as well as teaching dancing and singing lessons, which led to directing pageants and plays, for which she made costumes. Schmidt and her husband opened the Schmidt Costume & Wig Shop at 920 N. Clark Street, where Schmidt rented the costumes she created, and taught courses in “scientific costuming.” Interests in history and costuming led Schmidt to create detailed miniatures of powerful women through the ages, from Cleopatra to Mamie Eisenhower, which were displayed at the 1933 World’s Fair. In 1924, at the age of 58, having become known as “Chicago’s leading theatrical costumer,” she graduated from Chicago-Kent College of Law after four years of night and Sunday classes. She received her Masters in 1929; her thesis was entitled “Ancient Laws and Customs and the Evolution of the Status of Women.” Her intention, she told the Pontiac Chautauqua, was not to use her degree to practice law, but to do “simple, helpful things for the good of humanity.” Throughout the thirties, Schmidt was giving popular lectures from the basement of her Clark Street business and the University of Chicago, and her costume business was renting 60,000 costumes annually. She became a special lecturer at Northwestern University from 1936-1937. A respected and successful businesswoman, teacher, and costumologist, Schmidt dedicated her later life to philanthropy by financing a hospital for women and children in her native Sindelfingen, and providing for the education of seventeen nieces, nephews, and grandchildren. She passed away at the age of 95 in 1961.