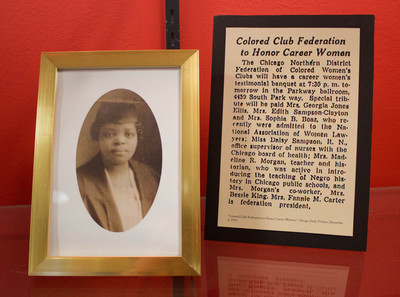 Sophia Bell Boaz graduated from Fisk University in Nashville, Tennessee in 1911. She moved to Chicago where she lived in the Charles Sumner Settlement on 31 W. Lake Street. At the time, social workers would live in a settlement house and become part of the communities they served. Two years later, she was appointed a Probation Officer of Cook County. She contributed to a study, The Colored People of Chicago: An Investigation Made for the Juvenile Protective Association, the first of its kind, which contained statistical information on the welfare of African American people in the city of all ages and status, including their housing, education, opportunities for employment, and available resources. Boaz graduated from Chicago-Kent College of Law in 1922 and was admitted to the bar in 1923. She continued in her efforts for civil rights by maintaining a staff position in the city’s Juvenile and Domestic Relations courts, offering her services in a way that resembled a social work agency. In 1943, she was one of three women to be the first African American admitted to the National Association of Women Lawyers.