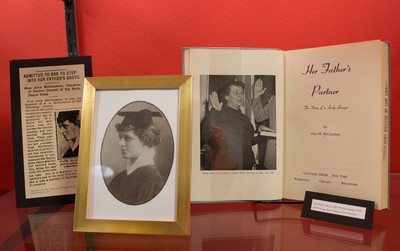 Alice M. McClanahan was born in Chicago in 1892 to a Chicago attorney, and later Chicago-Kent College of Law faculty member, Archie A. McClanahan. As a child, McClanahan spent time in her father’s law office and imagined becoming a lawyer. She later attended the Lewis Institute and upon graduation in 1911 enrolled in law school at Chicago-Kent. To earn her tuition, Dean Burke offered McClanahan the job of class secretary, which she performed until her graduation in June of 1914. Her mother fell ill in 1914, and McClanahan, being unmarried, was expected to stay home and care for her instead of taking the bar exam. In her memoir, she wrote “at the very beginning of my career, I was confronted by the fact that I was a woman.” She was finally able to sit for the exam and passed the bar in 1917. Upon her swearing in, the judge asked her “Are you really going to practice law?” And practice she did: she accepted a position as attorney for the Legal Aid Society in March of that year. Several years later, she began to work for her father, specializing in child custody, from 1920-1940. She was involved in early efforts to pass a bill allowing women to serve on juries, and was named Assistant United States Attorney for the Northern District of Illinois, Eastern Division, in 1955. She passed away in 1962 at the age of 70.