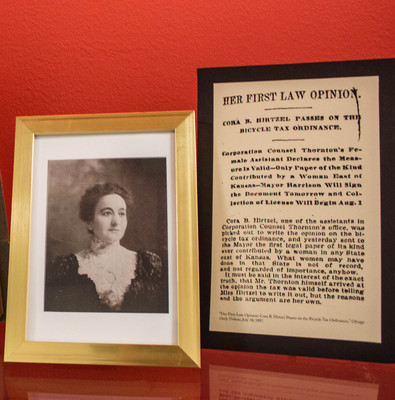 Cora B. Hirtzel was born in Ottawa, Illinois and came to Chicago in 1887 after studying law in the offices of Jackson & Thompson in Oakland, Wisconsin. She took a “regular course” at the Chicago College of Law and graduated in 1890, and was admitted to the bar in October of the same year. By 1892 she had left her employer, Hon. W.C. Goudy, to specialize in briefing. In 1897, she was appointed to the position of Assistant Corporate Counsel by Corporate Counsel Thornton, the first woman to be appointed to the position in Chicago. The Chicago Legal News remarked at the time that “[s]he was not appointed by Mr. Thornton because she was a woman, but because she is an able lawyer and capable of rendering him as much assistance in the preparation of cases for court, and making briefs and arguments, as any lawyer he could select for that position.”