TASS Windows: A Collection of War Posters from the Telegraphic Agency of the Soviet Union

Telegraph Agency of the Soviet Union 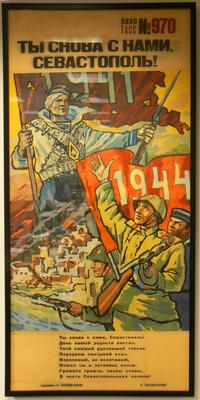 You’re once again with us, Sevastopol!
The day of our joy has arrived.
Each one of your surviving poplars
Has become a national treasure.
Wounded, but grandiose,
You’ve entered the annals of centuries.
Thunder louder, volleys of glory,
In honor of the Sevastopol regiments!